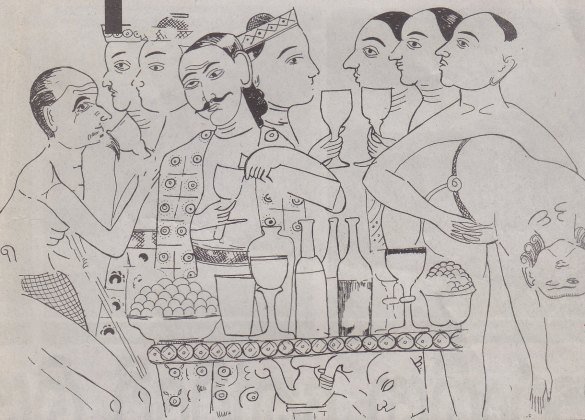 A famous Drinking Spot in Colombo in 19 Cent, was under the Tamarind Tree that was at the old 3rd Mile post in Kollupitiya. Everyevening the British, theSinhalese nobles and other gathered there to enjoy a shot of arrack and Toddy.

The manufacture was a state monopoly and private manufacture was limited. Sold in drinking houses specially built for this purpose in Cities, villages and  Camps.Drinking was prohibited in army camps during  battles. Liquor seller employed pretty females to sell them , who were to find out information about those conspiring against the state or King.  Moving about while drunk was prohibited. That  liquors made from Rice  was known as Medaka, prasanna was from Barley, Asava  was from sugercane juice, Maireya from Juggery, Madhu from garpe juice, and Arista for medicinal purposes.

Two basic types were called Sara and Kinva From Kinva, another type of liquor made from fermented bean pulp, two kinds of Sur can be mde. These were flavoured  with different types of spices or fruit juice. A type of liquor made without using Kinva by fermenting wood apple or bark, mixed with with Juggery or honey. Grape wine was also consumed.

Kinva= One lpart rice to 3 parts beans with added spices;for example: 1drona of pulp of raw or cooked masha beans.

1 karsha of each of the six mixed spices.

2 parts of Rice to 3 parts ferment and 16 parts water for example..

Bark and fruit of kranuka (?)

Addition to  Medaka and Prasanna

Clarifying agent for Medaka and Prassana.

A  decoction of liquorice and jaggery

Mahasura –White-Liquor and Mango juice, replacing in part the spice mixture  given above. This is to be clarified with a handful of mixed spice burnt Juggery and pulp of  herbs like partha  etc. The liquor can be made sweeter  adding 5 palas of jiggery.’ {2.25.17,18,26-28,31-34}

This is for average quality; for superior quality add one quarter more of each of the three ingredients and for lower quality one quarter less.

Sp ices to be added – l karsha each of cinnamon, chitraka, vilanga, quarter of the quantity of each of these is to be kept in liquor tied up in a piece of cloth.

A decoction  of bark of the meshashringi with juggery; spices to be added; long pepper and black pepper or tripala[ Nutmeg, Arecanut and coves].

‘Arrack the Drink of the Gods’

Arrack is the national drink of the Sri Lankans, distilled from  from Coconut sap or the Toddy. The  Northren Sri Lankan brews their arrack from the Palmarah sap.

Perhaps it was the drink that  added merriment to the wedding of Princess Kuveni relatives at the time of the landing of Prince Vijeya in the 5 Cent BC.[ Mahavansa -an ancient text of the Sinhalese written in 5 Cent BC].  The use of alchoholic beverages is also mentioned during the Wars of King Dutugemunu of the 2 Cent BC, where the Kings Elephant named Kandula and some of the Generals was intoxicated [ Mahavansa].

Arrack was issued in most Royal Navy vessels from the 18 Cent AD, mainly for the officers while the rating were issued Rum.

Discovered as far back as the 5th Century A.D. in Sri Lanka, Coconut Arrack is a unique alcoholic beverage obtained by tapping the Cocos Nuciferra or coconut palm. Lush coconut plantations in the island (spanning thousands of acres) were the inspiration for the tapping of toddy or coconut sap and its subsequent distillation to produce the much relished Coconut Arrack.

Today, arrack is the most popular alcoholic beverage in Sri Lanka.

Indeed, the transformation of coconut sap into an ambrosial beverage makes for a fascinating tale.

The first step involves Tapping or extracting coconut sap or toddy (as it is popularly known) from the unopened flower of the coconut tree. Silhouetted against the early morning sun, toddy tappers manually extract toddy while moving from tree to tree adeptly.

Once the toddy is collected in the earthenware pot, it undergoes rapid fermentation due to the natural variety of wild yeasts and bacteria. It is then poured into large wooden casks made out of Halmilla wood after a filtration process. These wooden casks are then gently transported to factories for distillation.

There are two processes of distilling; continuous distillation and the batch process (also called ‘pot distillation’).

The distillation process is completed within 24 hours.

Spirits obtained are purest and without impurities but leaves behind the authentic flavors in the spirits so that enhancing and smoothing will be done by the magical maturation process that takes place inside the Halmilla wooden vats. The contents of these wooden vats/casks are mixed thoroughly (for a fortnight) for better aeration and enhanced contact with the wooden surface. Herbs and spices from ancient recipes are also added to enhance flavor and mellow the beverage at the appropriate times during this all-important maturation process.

Coconut Arrack is a pure spirit that does not contain even a trace of methanol. The fact that it is distilled from naturally fermented coconut toddy makes it one of the most natural alcoholic beverages available in the world.

Finally, spirits of different age groups are selected with different flavors and blended to manufacture the Distillery Company of   Sri Lanka (DCSL) brands. Blending is done under the careful supervision of a well experienced connoisseur and Master Blender – before bottling. As the first and largest coconut arrack distillery in Sri Lanka and perhaps the rest of the world, this golden brew is DCSL’s flagship product.

(From the Annual Report of Distilleries Company of Sri Lanka PLC)

The Sri Lankan Distilleries Company annual report was designed by Splendor Media and illustrations by Dayan Kottachchi for the reading pleasure of Arrack Drinkers. 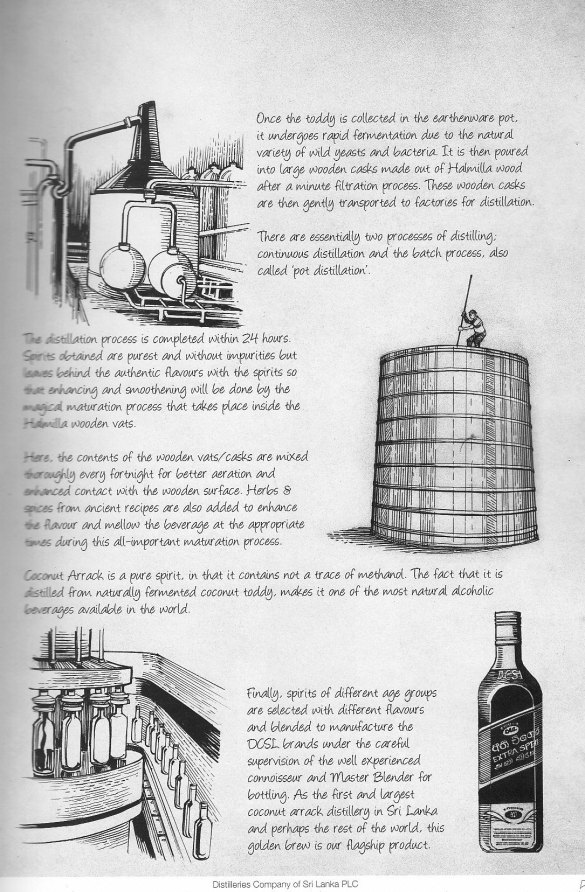 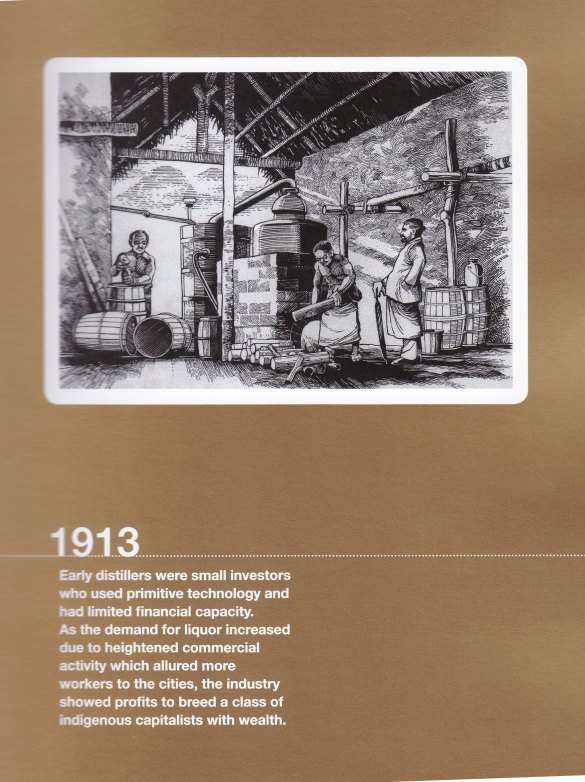 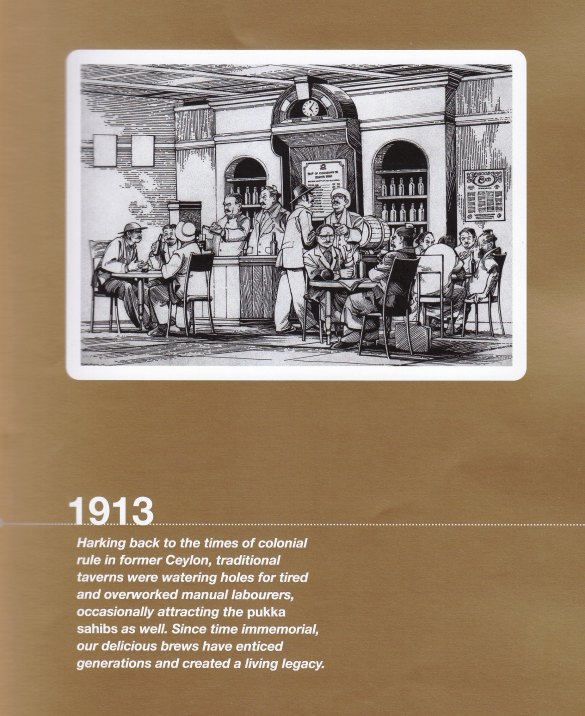 Sri Lanka is the world’s oldest and largest producer of coconut arrack.

Other than water, the entire manufacturing process revolves around the fermentation and distillation of a single ingredient, the sap of unopened flowers from a coconut palm (Cocos nucifera). Each morning at dawn, men known as toddy tappers move among the tops of coconut trees using connecting ropes not unlike tightropes. A single tree may contribute up to two liters per day.

Due to its concentrated sugar and yeast content, the captured liquid naturally and immediately ferments into a mildly alcoholic drink called “toddy“, tuak, or occasionally “palm wine“. Within a few hours after collection, the toddy is poured into large wooden vats, called “wash backs”, made from the wood of teak or halmilla trees. The natural fermentation process is allowed to continue in the wash backs until the alcohol content reaches 5-7% and deemed ready for distillation.

Distillation is generally a two-step process involving either pot stills, continuous stills, or a combination of both. The entire distillation process is completed within 24 hours. The first step results in “low wine”, a liquid with an alcohol content between 20 and 40%.[7] The second step results in the final distillate with an alcohol content of 60 to 90%. Various blends of coconut arrack diverge in processing, yet the extracted spirit may also be sold raw, repeatedly distilled or filtered, or transferred back into halmilla vats for maturing up to 15 years, depending on flavor, color and fragrance requirements.

Premium blends of arrack add no other ingredients, while the inexpensive and common blends are mixed with neutral spirits before bottling. Most people describe the taste as resembling “…a blend between whiskey and rum“, similar, but distinctively different at the same time.

According to the Alcohol and Drug Information Centre’s 2008 report on alcohol in Sri Lanka, the types of arrack are:[8]

Special arrack is produced in the highest volume, nearly doubling in production between 2002 and 2007. Molasses arrack is the least-produced kind and considered the common kind.[8] Nevertheless, as a whole, arrack is the most popular local alcoholic beverage consumed in Sri Lanka and produced as a wide variety of brands that fit into the following three categories:

Sri Lanka’s largest manufacturers, listed in order based on their 2007 annual production of arrack,[8] are:

Sri Lankan arrack was recently launched in the UK,[9] and will be imported to the US for an American launch.[10]